A lonely university student develops a romance with a beautiful interesting woman, who turns out to be a cyborg from the future. 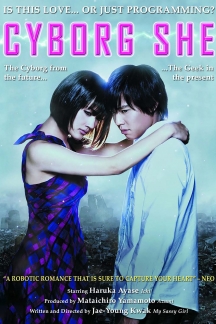 A lonesome college student, Jiro (Keisuke Koide), is spending his 20th birthday alone, when suddenly, a beautiful girl (Haruka Ayase) turns up. The few hours that he spends with her are the most incredible moments of his life and Jiro is overwhelmed by his good-fortune in meeting her. But his happiness does not last long as she disappears as suddenly as she appeared. A year later, on his 21st birthday, Jiro runs into her again at the same restaurant, where she saves him and countless others from a crazy assassin. She looks the same, but this time she is somehow different. It is the beginning of a relationship that would change his life forever.

Every now and then, a movie comes along and takes you by surprise... a fun romantic comedy with SF overtones and a couple of great sfx sequences (including an earthquake that puts Shinji Higuchi's SINKING OF JAPAN to shame), and a dash of the sentimental.