IN CRADLE BAY, IT DOESN'T MATTER IF YOU'RE NOT PERFECT. YOU WILL BE. 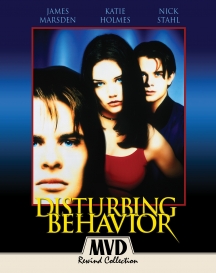 Stars James Marsden (X-Men, Sonic The Hedgehog), Katie Holmes (Batman Begins) and Nick Stahl (Terminator 3: Rise of the Machines) set the screen ablaze in this breathlessly fast-paced jolt-fest from veteran "X-Files" director David Nutter. Written by Scott Rosenburg (Con-Air) and featuring a hip soundtrack from the hottest bands around, this "clutch-your-armrest thriller" (Teen People) will pull you into the undercurrent of a deranged high school clique - and drag you away screaming!

Achieve, be excellent...and be afraid. For when the esteemed Blue Ribbon club of Cradle Bay High take their slogans too far, things in the small coastal town begin to go wrong. Dead wrong. And when a "dark sinister force" begins turning the school's curricularly challenged into the soulless, academic elite, three "outsiders" join in a desperate race to avoid becoming insiders and losing their individuality forever!

Dopey, histrionic fun from The X-Files alum David Nutter... It's all goofily ridiculous, sure, but it's also more than a little fun, and for what it's worth, Disturbing Behavior garners an instant Drive-in Academy Award nomination for Best Use of a Pink Floyd lyric since The Wall.

Put together by some of the production team responsible for 'The X Files,' 'Behavior' frequently captures the same weird/wacky atmosphere found in some of that series' more lighthearted episodes.