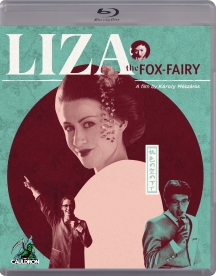 The Suitors Only Rival is Death. Liza is a lonely nurse whose only company is the ghost of a long-dead Japanese pop-star. Out of Jealousy, he turns her into a Fox Fairy and now everyone that is attracted to Liza dies a horrible death. In order to finally find true love, Liza must overcome the curse and defeat the jealousy of her suave, supernatural suitor. Imagine the candy-coated aesthetic of Amelie crossed with a darkly comic mean streak and you have Liza The Fox Fairy. Although it was released in 2015 and played the US festival circuit, Liza has been unavailable on Blu-ray worldwide... until now! Cauldron Films is here to bring you this utterly charming and playfully vicious gem in a brand new limited special edition!