W. Somerset Maugham's powerful story of Sadie Thompson has perhaps the most celebrated version. 'Rain' is one of the true classics of film history. 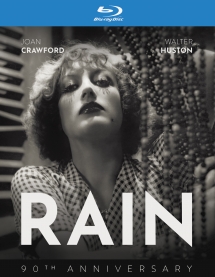 VCI is pleased to present RAIN, celebrating it's 90 Anniversary in a stunning new 4K restoration, produced from the original, uncut 94-minute version. It is a most important film in the history of the cinema, and one of the greatest films the 'Thirties' produced. The consummate dramatic and artistic achievement of both Miss Crawford and Walter Huston will give the picture life for many decades to come.

Crawford matches Huston's intensity and reveals the depth of emotions behind Sadie's slatternly, free-wheeling façade. The lush, nocturnal tropical setting with its copious precipitation and Polynesian drum music enhances the sensuality of the conflict between spirit and carnality, while director Lewis Milestone's mobile camera and telling visual touches (like Sadie's choice of shoes) offset the potential staginess of a theatrical adaptation. A flop in 1932, Rain has since recovered its artistic reputation, particularly for Crawford's then-shocking 'realism' as Sadie.

I was utterly captivated by Crawford's Sadie Thomson. This was an authoritative and dynamic femininity, unlike anything I had seen before. From the moment of Sadie's entrance on screen - four consecutive shots of two hands, wrists dripping with bracelets,

In movies for less than a decade, eventual Best Actress Oscar winner Joan Crawford (Mildred Pierce, 1945) holds her own in Rain while acting opposite an ensemble cast of stage-trained actors, among them Guy Kibbee, Beulah Bondi, and Walter Huston as Mr. D