While investigating the murders of several homeless people, Alex Murphy / RoboCop uncovers some of the city's darker secrets 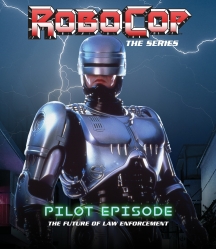 Alex Murphy (Richard Eden, "Santa Barbara") is RoboCop, a cybernetic, half-man / half-machine policeman who is the creation of Omni Consumer Products (OCP), a mega-corporation with divisions affecting nearly every level of consumer need, society, and government. RoboCop fights crime and occasional corporate conspiracy in the near-future of Old Detroit.

In this TV movie pilot episode "The Future of Law Enforcement" (which is based on the first draft that was intended to be the original "Robocop 2" feature film, from original writers /creators Edward Neumeier and Michael Miner (Starship Troopers), RoboCop is back to provide justice in Delta City. While investigating the murders of several homeless people, Alex Murphy / RoboCop uncovers some of the city's darker secrets.

'RoboCop: The Series' is by far one of the best and unfortunately, most overlooked TV shows ever

Each episode was interesting, entertaining, and with an hour run-time, there was plenty of room to perfect the pacing of each script. The writing, above all else, was the true highlight of the show. you will find that it's something of a hidden gem. It's

This TV series actually manages to capture more of the original than either of the two theatrical sequels. Okay, it's toned down for television, but the self-parodying humor is there in all the right places

The story is much the same, but the satirical elements and personal stories are done more stylishly here