The Ambassador is a one-of-a-kind excursion from the man whom The Huffington Post has called "the most provocative filmmaker in the world." 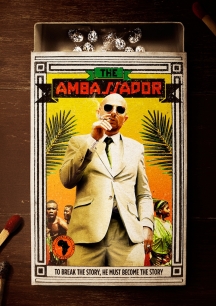 This darkly comic, genre-bending piece of gonzo journalism from international provocateur Mads Brügger rips the lid off the scheme of political corruption happening in one of the most dangerous places on the planet. Armed with a phalanx of hidden cameras, black-market diplomatic credentials and a bleeding-edge wit, Brügger transforms himself into an outlandish caricature of a European consul.

A stunning, funny, and vital piece of guerilla cinema. Few documentaries bother to pursue such a complicated subject in such detail, let alone at such personal risk, and though the conclusion leaves some questions unanswered, Brügger confirms that he is one of Europe's most exciting filmmakers.

It is highly watchable, clearly (and unabashedly) exploitative and often offensive - but it undeniably unearths some very uncomfortable truths about Central Africa in general, corruption in particular and individual greed on top of it.