Experience the far-out exploits of JOHNNY SOKKO AND HIS FLYING ROBOT as they battle the vile minions and colossal monsters of Emperor Guillotine. 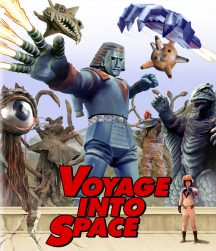 Do you remember Voyage Into Space - the story of a boy and his flying robot - on afternoon broadcasts of the 3:30 Movie or 4:30 Movie when you were a kid? Finally, this missing link in the adventures of Johnny Sokko comes to home video for the first time in this Blu-ray release! Experience the far-out exploits of a young secret agent with the Unicorn Peacekeeping Organization as he battles the vile minions and colossal monsters of Emperor Guillotine, extraterrestrial dictator of the nefarious Gargoyle Gang! Joining the fight is an atomic-powered giant robot, armed with a fantastic array of superweapons, which only Johnny can command via a unique remote control wristwatch! This original compilation movie, assembled by American International Television from episodes of the Toei Company tele-series Johnny Sokko and His Flying Robot, was a beloved favorite for scores of kaiju-crazy kids across the US in the '70s. From the makers of Gigantor and Kamen Rider, Voyage Into Space is part James Bond, Jonny Quest, and Ultraman, shaken - not stirred - with over-the-top plots, oddball villains, outrageous creatures, outré special effects, outlandish action, topped with an offbeat jazz combo score, resulting in a mind-bending adventure in all its English-dubbed glory! If you're reliving memories or creating new ones, let's take off on a Voyage Into Space! - August Ragone, author of "Eiji Tsuburaya: Master of Monsters"

With a high camp attitude and plenty of lasers along the way, this cheese-fest is absolutely a 98-minute blast of low budget kaiju vibes.